" . . . and, lo, the star, which they saw in the east, went before them, till it came and stood over where the young child was.

When they saw the star, they rejoiced with exceeding great joy"
Mt 2:9&10

I posted this story last year on NaijaStories, but I want to share it again here, because the message of Christmas never changes. 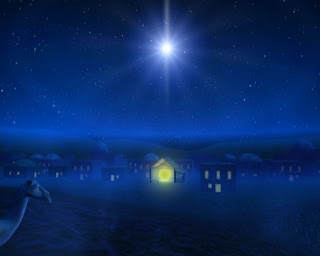 He stared at the screen, trying to make sense of the figures on it, same thing he had been trying to do for the past three hours. For some reason his mind was not cooperating, something strange was going on in his heart. It felt hollow, empty and ached ferociously.

He stood up for the umpteenth time and walked round the spacious office, his feet disappearing into the thick rug underneath.


Standing by the window, he stared out into the deepening sky and looked down at the city with its lights just coming out to battle the approaching darkness.


He loved this city. The life, the energy, the promises, the challenges! He had always loved it and just looking at it was usually enough to fill him with a burst of enthusiasm, but not today. Today, nothing seemed to work.
Deep in his heart, he knew this depression was not new, it had been lurking deep inside for some time now, but for some reason, it was worse this evening and he didn’t know why.


He turned and stared round his office: the penthouse of the fifteen story building that housed his company. The company he had built from scratch. The symbol of his hard work and much earned success. He had given his all to this company and now that it was firmly established, he should be happy, he deserved to be happy. But he wasn’t.


With a sigh, he turned back to the window and realized with a start that the sky was dark and the stars were out. Time had flown by as he pondered his inner dissatisfaction. He reached behind him to ring for his secretary, then remembered she had left for the day, so had everyone else and he remembered why – today was Christmas eve and they had all closed early. He was the only one left in the building, even his driver was gone.


He stared up at the sky, seeking – what? He didn’t know.


Then he saw one of the stars, shinning more vividly than the others. It stood apart, majestic, glowing big and bright.


Looking at it, he suddenly remembered a legend from his childhood, that if one followed the biggest star, it would lead one to what the heart needed above all else. As a man of facts and figures, he didn’t believe in such myths, or any myth for that matter, and he had no doubt that this particular one had its roots in the story of the birth of Jesus and the wise men, but today his lonely heart would not be reasonable.


Still staring at the star, he was suddenly overcome with an irrational urge to follow the star. At least, let him test the legend and prove it wrong, he tried to rationalize his illogical urge.

Irrational or not, he had always been a man of action, so he picked up his jacket and strode out of the office into the lift.


Emerging out of the building, he looked up, suddenly afraid the star would no more be there, but it was still there, looking even bigger, calling him with its unearthly glow.


He got into his car and feeling foolish, but strangely compelled, drove out of the compound, not even hearing the guard’s “Merry Christmas, sir”, and started following the star.


He drove down the road, exiting to the highway and it seemed as if the star moved ahead of him, leading him. He drove automatically, not really conscious of the road, just keeping the star in his sights, determined not to lose it.


For about thirty minutes, he followed the star as it led him into a residential area, winding round palatial mansions till it came to a stop over a huge house, more palatial than the others.


He stopped the car in front of the massive house, frowning in confusion. He hesitated for a moment then put the car in reverse and drove away from the house. He looked up for the star as he drove away, but the star was no more ahead of him. It stayed behind, hanging resolutely over the house.


He stopped again and turned around in his seat to look back at the star. It shone fiercer than before, calling him.


Against himself, he got out of the car, and like one mesmerized started walking back on foot, not even aware that he left the engine running and the door opened.


He walked back up to the house; it was bathed in the light of the moon and the two seemed fused together, becoming one in an eerie, yet, welcoming way; both calling silently to him.


He stood in front of the door, hesitated again then took a deep breathe and opened the door. He followed the sound of voices into the house and came to a large living room.


In front of a Christmas tree and carved animals artlessly arranged, stood Joseph smiling down at a little Mary with baby Jesus asleep in a baby stroller before them, his head lolling to one side.


Joseph and Mary turned at his entrance and he saw shock on their faces. He also saw Joseph glance up at the grandfather clock beside the door to check the time and turn back to look at him, a concerned frown creeping up on the face.


Staring at the scene before him, something in his heart trembled and gave way. On shaky legs, he walked over to them, reached out a trembling hand to Joseph’s face and touched it reverently.


Before his shocked wife could answer, a tiny voice piped up indignantly, “Then what will I be?”


He looked down at his little daughter and reached out a hand to draw her close to him, “An angel, my darling. You will be my angel, the angel you have always been”


That was all he could manage before his voice broke and he started sobbing loudly. In huge heaves, the loneliness seeped out of him, the depression curled up and withered, the heaviness grew light and drifted away. And yet, he continued sobbing.


His sleeping son woke up and started crying; he knew he was scaring his daughter and wife, but he could not stop.


“Sweetheart, what is it? What is it?” his wife asked worriedly.


Outside the house, the star glowed brightly one more time over the house then moved away, up, up to hang back in the sky. Waiting to lead another lonely heart back home.


May that same Star, that hundreds of years ago, led those wise men to the little baby Jesus, also lead all of us back to HIM, our true HOME.